The truth is I've been playing games on my Mac. Don't judge me! I know, I know, I've heard it a million times gaming on windows is so much better than on a MAC.

But, hey, I got a new 16" MacBook with the upgraded graphics card and my PC is sitting somewhere in a closet collecting dust.

To put things in a little more perspective, I've been "gaming" for about two hours a day. Specifically, I have been playing World of Warcraft. Which you may or may not know, it is an MMORPG. This meaning you play with other people on the internet, and it requires communication.

My Criteria for A Gaming Headset for Mac The bottom line is I needed a gaming headset for Mac. Here is what I had in mind:

My wishlist isn't asking too much, is it? While there are MANY gaming headsets on the market, not many mention MAC compatibility.

Most went on to say how they are compatible with PC, PS4, XBOX, etc. So, I just assumed if it works with everything else, why wouldn't it work on my MAC.

So I bought three different gaming headphones for Mac to try.

I got all of these around Black Friday, so I got them for a good deal. My thought process was to get the headphones, find the one I liked best and return the others that were unsatisfying.

I Got Fooled Trying to Buy a Mac Headset

I tried all of them, and I wasn't happy with the sound quality of any of them. The gaming headsets didn't sound ANYTHING like the sound demo set up at Best Buy.

Even the LogitechG635 headset was Mac compatible, or at least it claimed to be. But - what this really meant is that you could download software called G hub to configure your lighting profile and raise and lower the volume of the gaming headset for Mac.

After feeling shortchanged, I got an idea. Yup - I pulled my Windows PC out of the closet where it was collecting dust. NO, don't jump to conclusions and think this blog post ends we me converting to PC from MAC. There is MORE to this story.

Upon plugging in the gaming headsets to my Windows PC, they worked great. The sound quality is pretty much stellar in all of them. That's when the root cause of the problem dawned on me.

MAC Surround Sound is Not Supported

Apparently, all of the headphones would work with Mac after connecting them. But if you wanted just plain flat sound, you could buy a $10 pair of headphones.

So this wasn't a problem with the headphones specifically. This issue was a flaw with maybe Mac software not supporting surround sound built-in. But, being the problem solver that I am, I was not ready to give up that easily.

I went on a "quest." Yes, Warcraft pun intended.

I Tried to Install Windows on my Mac

First, I thought OKAY - what if I put windows on my Mac and then used Parallels to run a virtual machine of windows to solve this problem. So I tried that, and it only led to more frustrations.

Because first, to buy a license of Windows 10 from Microsoft was like $100+, and I really didn't want to jump through those hoops just to get my headphones to work.

But the next idea I had, was could I transfer my existing Windows PC over to my Macbook? Technically I could, and I did attempt.

However, trying to transfer a few gigs over a wifi connection was going to take forever. I gave it a shot, but the connection would keep getting interrupted, and I would have to start over.

SCRAP THAT! There had to be another solution!

After I previously downloaded the software for the Logitech headset that was Mac compatible for both PC and MAC. I noticed one thing that the software did not have in common. A sound equalizer where you could fine-tune how you wanted your sound settings.

So I used my best friend Google to try to find a solution, and sure enough, it was the answer to my prayers $20 later. A few days of hard work finally paid off, and the answer was installing a third-party app that creates software-based surround sound.

With Macs being aimed at creative individuals - I'm not sure why 3D sound isn't a no brainer to come built-in. Wouldnt you love to kick back and watch a movie on your laptop immersed in surround sound?

To Get Mac Surround Sound I Used Boom 3D (Review)

I came across this software called Boom 3D. It appeared promising. The good news at the time is it did have a free trial. Gotta love a free trial, right? The moment I enabled the surround sound feature - BOOM! That was the sound quality I was aiming for.

It was one simple solution to solve the needs of a gaming headset for Mac. The application automatically starts up when I restart my computer, and Boom 3D has different sound profiles based on the different types of audio you are listening to. 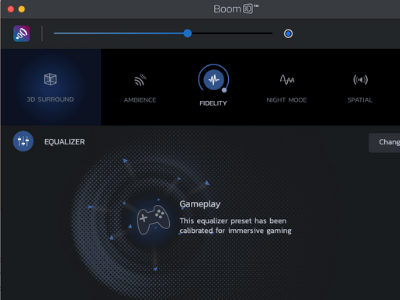 My preference is the Boom 3D sound profile on gaming when playing games. But if listening to music, I prefer the ambiance setting. It does have a lot of other settings built-into Boom 3D, but my use-case for this software is basic. I don't change my settings too much. I'm more of a set it and forget it kind of gal.

With that being said, I hope if you are also on your quest to try to get peak performance out of your gaming headset for Mac, then get Boom 3D.

For $20.00, I got two licenses and gave one to my husband. So, now we can play games with the superior sound quality from our Macbook Pros.

Which Gaming Headset for Mac Did I Choose to Keep?

If you, too, are planning to purchase a gaming headset and kind of feeling a little stuck, I understand that. I will share my thoughts on each headset I used and the decision I made.

I thought my husband wanted this one. We saw it one day a few months ago at Best Buy and said he liked it. He was also leaning more towards wired over wireless as he assumed it would have better sound quality. In a mad-dash on Amazon on Black Friday, I apparently bought a "refurbished" product, but it worked fine.

Here's what I liked about the Logitech G635: 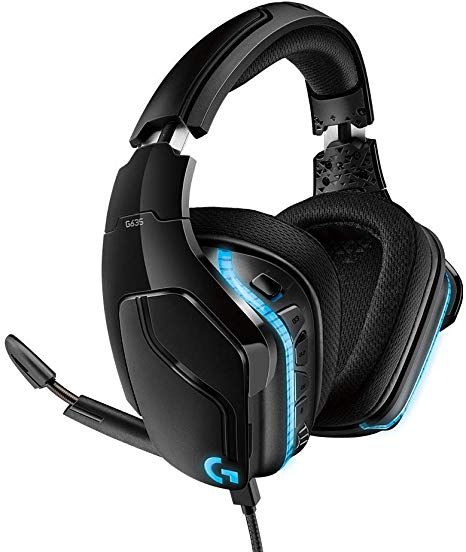 After-thoughts of the Logitech G635

Ironically, this ended up being the headset I kept for myself. Although the smell was pretty rough and still has a slight odor ugh. I liked the design and performance of the headset overall. Most of all, I really liked the microphone sound quality. Plus, I also loved how the microphone is hidden. You can pull it out when you want to use it or push it in to hide it.

I thought I would prefer a wireless headset, but then it would need to be charged more often - likely leading to more frustration on my part. I have also debated getting the upgraded wireless version of this headset to evaluate the performance and see if they are just as good of a gaming headset for Mac.

This is the gaming headset I initially choose for myself. It had excellent reviews and was fairly new. I liked how it was sturdy and came in a white color option. After unboxing the Corsair Void Elite, I noticed that the top of the headset had a nice memory foam material for added comfortability. These are certainly solid headphones, but here are my thoughts.

What I liked about the Corsair Void Elite:

I definitely would have settled on these, but my husband really enjoyed them. So we ended up keeping these also. I think Corsair products are really good. I've had a Corsair rainbow backlit keyboard for years with no problems. This is also a great gaming headset for mac choice, especially for the larger headed individuals.

Best buy was selling these on Black Friday for only $200. They usually retail for over $300+, so it seemed like a good deal. Although they are not a "gaming" headset, we thought they could be "good enough" for us "casual gamers," so we decided to order two pairs of these also.

I had the original Beats Studio headphone for years, and while they had decent sound quality, they had other flaws.

For example, one of my main complaints with the originals was that they always needed to be charged. Turning off, noise-cancellation was not an option, and once the headphones were "dead," you couldn't listen to your music anymore. Even though the originals were not "wireless."

They did end up fixing a few of the original flaws in the Beats Studio 3, but some things were just not worth settling on for my use case.

What I liked about the Beats Studio 3:

After-thoughts of the Beats Studio 3 headset

I really expected more bang for the buck. I was so disappointed with the built-in microphone quality. I'd say it's an embarrassment to Apple. Why even have a built-in microphone that makes you sound like you are in a wind tunnel? I mean, for more than double the price I paid for the other headsets, this was a deal-breaker for me. Not worth wasting your time on Beats Studio 3 as a gaming headset. Products returned!

What Gaming Headset for Mac do You Use?

I'm curious if you game on a mac and which gaming headset do you use? I really hope this article has helped you in some way, and I would love to get your feedback. Feel free to drop me a note below!

Krista Brea is a digital unicorn, always on a quest for knowledge. When she’s not serving her clients, you might find her playing world of warcraft, or getting bullied by her Pomsky. Krista loves to find fun in all things that she does, and she currently lives in Chicago.